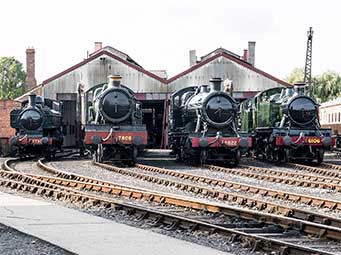 Another building which is very evident as you enter the Centre is the Coal Stage. 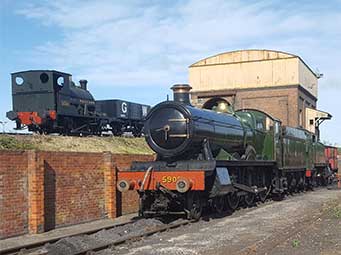 This building was designed to make it as easy as possible to coal and water the locomotives before sending them out for their turns on the railway network. The large tank at the top of the building supplies water through large diameter pipes to the water cranes which can be seen in front of the Engine Shed.

Coal is brought into the building via rail wagons which are propelled up the long ramp starting near the entrance to the Centre. Coal can then easily be unloaded into wheeled tubs which can then be tipped directly into the tender or bunker of a locomotive. You can often watch a locomotive being coaled during the course of a running day.

The Turntable, situated beyond the Engine Shed, is used to ensure that tender locomotives in particular are facing in the direction of travel. 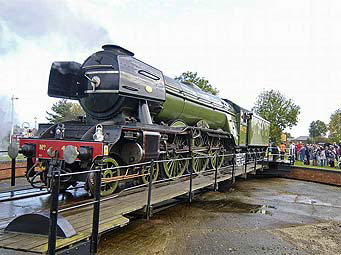 The current Turntable is on the site of the 1932 Great Western one but is a replacement table, as the original had been removed by British Rail before the Great Western Society arrived at Didcot.

The Turntable is 70 feet (21m) long and is capable of accommodating the largest tender engines. It is operated by hand either directly by pushing on extension levers or by operating a geared winding mechanism

A locomotive will often be turned on Gala Days and Special Events, and the Turntable is also occasionally used to turn locomotives from visiting excursion trains. The Turntable is adjacent to, and easily viewed from, the Picnic Area. 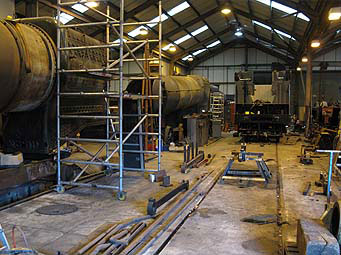 Access for visitors to the Works is necessarily restricted by the nature of the heavy engineering work being undertaken within this building, but we will endeavour to provide a viewing area, whenever the centre is open.

In addition to the main buildings of the 1932 Engine Shed, there are other original features to look out for as you walk around the centre, such as the sand drying furnace. There are also other features which were necessarily added by the Great Western Railway at a later date, such as the second world war Air Raid Shelter and the remains of the Ash Shed, used to shield the light from hot ashes, being removed from locomotives, from the gaze of passing hostile aircrew.