Didcot Railway Centre will provide a real treat for visitors over the August Bank Holiday as two of the living museum’s flagship locomotives – each with a fascinating story – will be in action on Saturday 29, Sunday 30 and Monday 31 August.  The event is the only time this year when GWR express passenger locomotives No. 2999 “Lady of Legend” and No. 6023 “King Edward II” will be working side by side.

90 year-old 6023 is one of the Great Western Railway’s famous “King” class locomotives – once the most powerful type of engines on Britain’s railways. The locomotive was sent to the notorious scrapyard at Barry in South Wales to be cut up in the 1960s – indeed following a derailment in the yard, one set of driving wheels were cut through as this was easier than going to the bother of rerailing the engine.

While enthusiasts rescued many other locomotives from Barry, 6023 remained, quietly rusting – the severed driving wheels a seemingly insurmountable obstacle to her ever running again. After a short spell on display in Bristol, the locomotive came to Didcot in 1990 and following a restoration that took over 20 years to complete returned to action complete with newly cast driving wheels in 2011.

Almost a decade later, she will soon be withdrawn for a boiler exam as safety legislation requires the engines to be taken apart every ten years so the boiler can be thoroughly inspected.  The team are determined to give visitors the opportunity to see “King Edward II” in action before she comes out of service.

Working alongside 6023, will be 2999 “Lady of Legend” – a handsome “Saint” class locomotive that oozes Edwardian elegance.  The award-winning engine was launched in 2019 – the culmination of a 24-year project that cost over £825,000 to recreate this long-lost type of loco. The last of the original Saints was scrapped in 1953 and 2999 was created by “reverse engineering” a Hall class engine as their design had been developed from the Saints. The task would have been an engineering challenge if the donor engine were in working order, let alone starting with one in scrapyard condition – it was also saved from Barry!

The team that created “Lady of Legend” won the prestigious Chairman’s award at the annual Heritage Railway Association Awards earlier this year and the locomotive has also be shortlisted in the national Museums & Heritages Awards for the best conservation or restoration project.

The weekend is the first special event since the Centre re-opened after lockdown in July, “The two engines epitomise the dedication, enthusiasm and sheer determination that characterises heritage railways in general and Didcot in particular so after the challenges of the enforced lockdown it will be very special to have the two of them running together.” said Chief Executive, Emma Jhita.

The two remarkable locomotives will be pulling trains on the Centre’s demonstration line on 29, 30 and 31 August and visitors will also be able to see the spectacle of them being turned on the 70ft turntable and being loaded with coal under the Listed coal stage - the last working GWR example. Tickets for the three day event are limited and can be booked online at https://didcotrailwaycentre.org.uk/product.php/98/august-bank-holiday-steam-up.

As well as the unlimited train rides, visitors can watch shunting demonstrations with goods wagons and one of the site’s 1950s diesels on the Centre’s branch line, explore the extensive outside spaces at the 21-acre living museum and discover almost 200 years of railway heritage in the Engine Shed, carriage exhibition and Victorian Broad Gauge display.

After the Bank Holiday, the Centre is open for Steam Days on weekends and Wednesdays throughout September. Further details can be found, and tickets booked, at www.DidcotRailwayCente.org.uk. 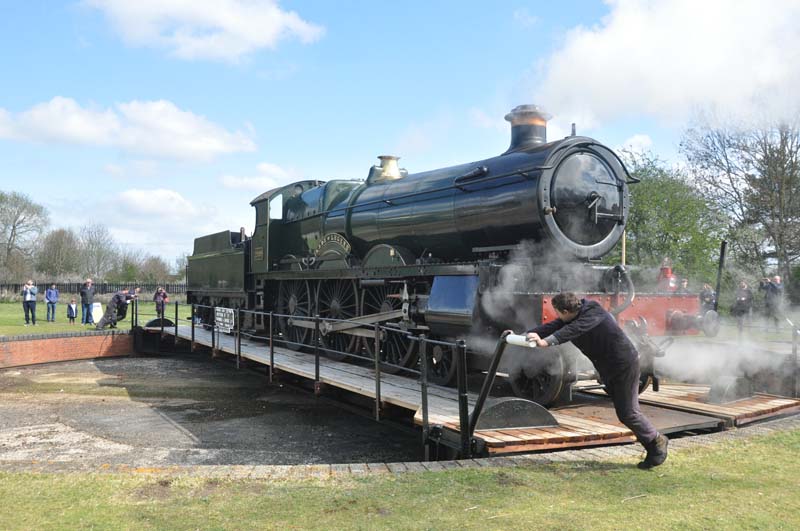