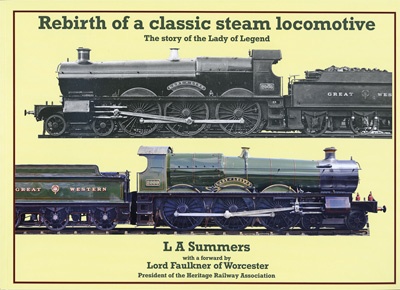 Rebirth of a Classic Steam Locomotive

This glossy A4 size, landscape format, perfect bound book describes the project to re-create an example of the locomotive class which defined the Great Western Railway's locomotive policy for the 20th century.

The author outlines the career of George Jackson Churchward from schooldays to becoming Locomotive, Carriage & Wagon Superintendent of the Great Western Railway, based at Swindon. Churchward's quest to establish an effective fleet of locomotives led to an interest in developments on other railways, including those in France, Austria and North America. The adoption of the best features of ‘foreign' locomotives blended with traditional Swindon practice led to a series of designs which satisfied the Company's needs until the elimination of steam traction in the 1960s. The two-cylinder express passenger engine first appeared in 1902 and subsequent series production or an improved version from 1906, became known as the 'Saint' class.

Their reputation for fine running, often with substantial loads, fascinated railway enthusiasts and led to great disappointment when no positive moves were made to preserve an example for posterity. Preservation bids and the first project to build a replica all failed, for lack of finance. Despite the setbacks there were a few far-sighted members of the Great Western Society prepared to take a long-view and acquire components (including a 'Hall' class engine from a scrapyard). In the background several individuals investigated the precise requirements and procedures to 'reverse engineer' the 'Hall' to a 'Saint', bearing in mind that Saint Martin was converted to become the first 'Hall' in 1929.

It was decided early in the new-build phase that the engine should be capable of running as an 'Atlantic' as well as a 4-6-0. The necessary outside sub-framing to accommodate a trailing truck is a quite straightforward addition and has already been manufactured.

The early 'Saints' had a straight running plate from above the cylinder to the rear of the cab. The rather stark appearance of this arrangement led to adverse comment from observers when the first example saw the light of day. Churchward gave Harold Holcroft the job of giving the class a more harmonious appearance, which was achieved by introducing a curved descent to a level portion below the cab which matched the height of the tender floor angle iron. Not all engines were thus modified, some retaining the gaunt appearance until withdrawn in the 1950s.

Mr. Summers has done a fine job in presenting a complicated tale in a very readable manner. The stalwarts of the Great Western Society past and present who promoted the project and brought it to a triumphant conclusion are all given due credit and most appear in one or more of the numerous photographs.

The illustrations – both line drawings as well as black and white photographs, reveal many of the details of items referred to in the text. The author's own colour photographs of the completed engine in all its Edwardian glory show what a fine job has been done by the dedicated team at Didcot.