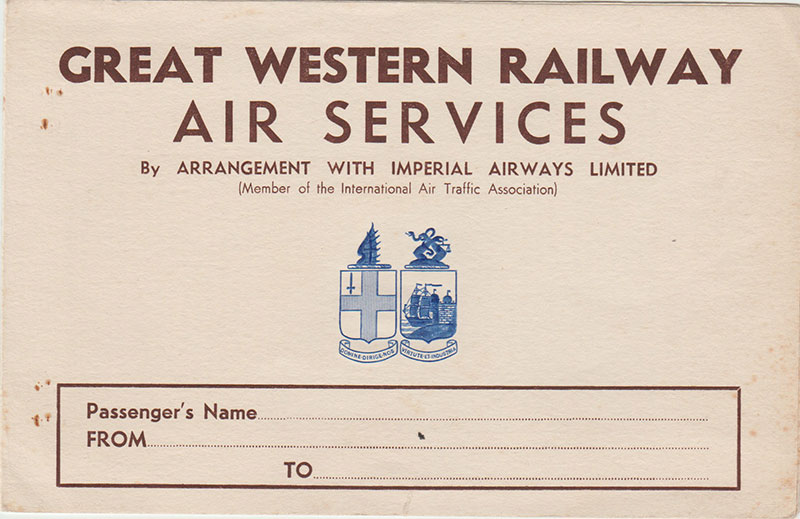 With all the pent up expectation of at last literally flying away to foreign climes for sun, sea etc, but perhaps nervous about our airport reception on our return home, maybe we should holiday this year at least in the UK?

Well although pre Covid, the whole world took for granted a vast choice of affordable holidays using aeroplanes, in 1933, it may surprise you to be told that the Great Western Railway, inaugurated an air service within its UK domain, having been granted such transport powers by its 1929 Act.

It was only possible through a contractual relationship with Imperial Airways, using their aircraft and ground facilities and pilots. Never missing a publicity opportunity, the GWR somehow managed to have the first aeroplane, a 3 engine Westland Wessex registered as ‘G-AAGW’ sporting ‘Great Western Railway Air Services - Operated by Imperial Airways’ beneath the Pilots Cabin, with the fuselage adorned in the chocolate and cream Company colours!

The first service was operated between Cardiff (Pengam Moors aerodrome) and Plymouth (via Haldon aerodrome) with connections provided by GWR omnibuses of course.

Our Great Western Trust collection contains a wonderful array of the striking brochure publicity and timetables, contemporary photographs and even the Pilot cab badges! However our Tuesday Treasure today, is the GWR issued Boarding Pass of which we illustrate both the front and rear pages of its simple fold out card design. 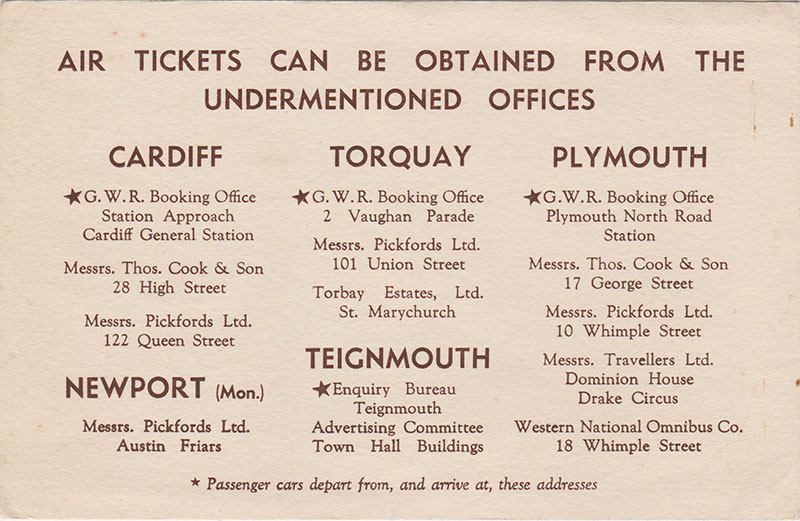 It should be explained that this service was for wealthy folk only, as it was obtained at a premium over and above the normal first class rail fare between Cardiff and Plymouth. The small plane only provided 6 wicker seats, and in good weather initially operated two out and return flights each weekday. This was also, a very early period in air transport, and our eyes may be startled by the most useful instructions that passengers received from within the Boarding Pass, in the form of no less than 12 very detailed ‘Extracts from the General Conditions of Carriage of Passengers and Baggage’ (the age of small print is not new!), which helpfully includes in Item 5, that:

‘Passengers are forbidden to open exterior doors during flight; It is also forbidden to throw articles from the aircraft’. Worse still, any person contravening these regulations is responsible for all damage resulting from the contravention. Well if it crashed, would he (yes all instructions infer the masculine gender) be alive?

Readers wishing to know more about this fascinating aspect of the GWR, are recommended to read John Stroud's excellent book ‘Railway Air Services’ published by Ian Allan in 1987.

The conveyance of private carriages goes back to the very earliest days of the railway age and the 1839 time table featured two weeks ago makes mention of charges for carriages and horses for journeys between Paddington and the newly opened temporary terminus at Twyford, Berks. Indeed well into the twentieth century, horse porters were employed at major stations specifically for such traffic.

Fast forward to 1956 and, encouraged by the success of the Anglo-Scottish Car-Sleeper Limited between London and Perth launched the previous year, British Railways (Western Region) inaugurated the West of England Car Tourist Service. The service ran on weekdays from April to October from Paddington to St Austell. In the days before the motorway network was constructed, these trains would have been infinitely more comfortable than spending many hours struggling down congested single carriageway A-Roads. Using Kensington (Olympia) Station as a London base BR's Motorail service which was launched in 1966 eventually grew to serve more than twenty destinations throughout the UK.

Part of the Great Western Trust's poster collection includes the West of England Car Tourist Service. This must have been one of the last posters to feature a steam engine as in 1957 the diesel hydraulic era was very close; indeed pioneer locomotive D600 arrived at Swindon in January 1958 entering service later that year. The poster is very much of its time, depicting an interesting selection of 1940s and 50s road vehicles.

A recent Blog focussed upon the GWR publicity item for the 1937 Easter Holiday, with its design delightfully based upon chickens! With our current glorious April sunshine combining with stunning countryside and the welcome sound of new Spring lambs, what better subject for our latest Blog than this four page BR Western Region handbill of December 1954? Yes, the railways had to be well ahead of family debates about where to go next year, so maybe over Christmas and New Year, this message made its mark?

The handbill contained details of trains and ‘specially reduced’ 3rd Class only fares from London (Paddington of course!) to numerous destinations in the West of England, on Saturdays only, from April 2nd to May 21st 1955.

Just as we have previously explained, the cover design had to ‘capture the attention’ of a rail commuter or regular traveller, probably by being placed in close proximity to the station Booking Office, Ticket Hatches, so even when in a queue for your ticket, your eyes would catch sight of it. The graphic design artist chose to adorn the lamb, already a spring season icon, with a rather stylish, striped bow tie, when such fashion items were still popular, but nowadays rarely seen. Unfortunately, unlike the majority of such handbills in the Great Western Trust collection, this example lacks any indication of the number that were printed, but it was surely at least many thousands.

Oh, and on its final page, to prompt thoughts and plans beyond Spring but into Summer, there is a reminder to purchase at one shilling, the BR Holiday Guide No4, covering the Western Region locations! You may recall that our other recent Blog illustrated the 1957 Holiday Guide for Wales and the North West.

Quite what folk in 1954/55 would have made of ‘staycation’ is best left to our imaginations.

One of the oldest items in the Trust's collection is a Great Western Railway timetable dating from August 1839 (GWT/RKB/2377). This was some two years before the original main line from Paddington to Bristol was opened throughout and services at the eastern end had just been extended to Twyford. On weekdays, between 8am and 8.30pm, fourteen trains per day ran each way from Paddington and West Drayton, Maidenhead or the newly opened Twyford Station. On Sundays, only eight trains were run, doubtless to the consternation of the clergy who saw the potential for their congregations to be distracted from the straight and narrow (by the straight and broad!) The interval between trains was never less than thirty minutes; this being considered a safe way of working before the introduction of more sophisticated signalling systems.

The fares from 1839 are particularly interesting. A 7 shilling (35p), 1st class single from Paddington to Twyford is the equivalent of £37 at current values and yet the cheapest first class fare on today's GWR is £27. Similarly the 2nd class open carriage fare of 5 shilling (25p) equates to £26 compared to the 2021 fare of £16. So some fares are cheaper in real terms than they were 180 years ago and services are faster, cleaner and more frequent than they were in those early Victorian years.

Also of interest are the rates for the conveyance of horses and private carriages which were conveyed from and to Paddington, Maidenhead and Twyford stations at rates between 6 shillings and 12 shillings for a carriage and up to 16 shillings for a pair of horses. This may well be the reason that passengers and horses all smelt similar in 1839.

Continuing our theme of holidays, upon which the Great Western Railway maximised its publicity as boldly being ‘The Nation's Holiday Line’, the Great Western Trust Collection has a bounty of items created for that market.

Today's blog however is a cover image of the nationalised British Railways Holiday Guide for 1957, dedicated to the Wales & North West region including the Isle of Man. These guides were the BR published successors to the individual Big Four Railway Company's similar annual guides, and this series ran from 1949 to 1962 when BR ceased publication ‘to universal regret’ and Dickens Press took it on in 1963 followed in 1964 by Littlebury & Co after which it ceased permanently.

Of course following railway nationalisation the various realignment of the ‘Regions’ ever more away from the ‘Big Four’ inheritance, created new zones, hence this edition illustrated covers the Welsh ex GWR area and a large element of the ex LMR area in North Wales, Lancashire & even the Lake District. In all BR created five regionally dedicated booklets each year, this one being No2 in that series.

At one old shilling (5 new pence today) after inflation it's equal to about £1.20p today. For that cost, you had 324 pages of location, train travel and holiday accommodation information and many sepia pictures, and a pre-printed post card to the Regional Commercial Manager for specific travel enquiries!

The ‘cool dude’ on the cover is a rare example, given that many others were of ladies at the seaside. That said, studying the 5 regional versions each year, also illustrated the climatic differences and to an extent differing social expectations. Perhaps the greatest social interest however is in the dominant sections of holiday accommodation adverts, which in part reminds your blogger of that TV comedy classic series ‘Fawlty Towers’. We know that in preparation for each following year’s editions, Station Masters were directed to seek out local Hoteliers and Bed & Breakfast operators to pay for their adverts, and offered special rates for those showing train usage by their customers.

The Great Western Trust has a complete run of every GWR ‘Holiday Haunts’ guide, but is yet to complete a set of the BR successors (note BR began with ‘Holiday Guide’ and reverted to ‘Holiday Haunts’ title in 1958) and would welcome offers of donations from our Blog readers!

Do any of our readers recall such holidays by train?