All aboard for the "Radio Cruise"

Billed as ‘The Finest and Most Unique Rail Tour in Britain’ the tour ran Mondays to Fridays from June to September. It was a dedicated train with “an individual armchair for each passenger, facilities for light meals and refreshments a descriptive commentary over a loudspeaker system of the passing scne” – hence the unusual “radio” tag in the train’s title. 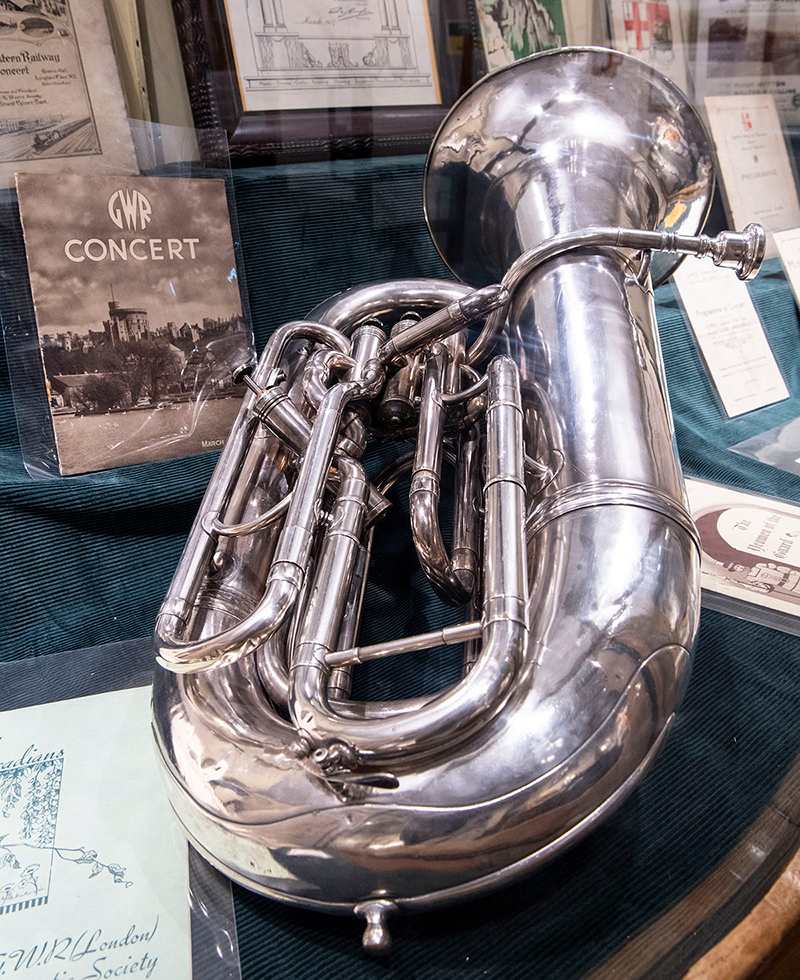 With a very large number of staff (before 1918 they were called “Company Servants”) employed over their physically diverse system, the Great Western realised, very early in its existence, that as well as purely physical welfare, covered by their numerous welfare funds, social recreation for staff was of equal importance. The GWR Literary Society was founded in 1852, then others arrived such as the Theatrical Society, Amateur Dramatics, Gleemen Songsters, Scout Society and numerous others. Here we focus upon the Staff Association, which was the successor to the GWR Social & Educational Union.

This body was particularly relevant to us at Didcot, in that it held an annual Festival of Music at the Town Hall, Reading. Illustrated is the Syllabus & Entry Form (Price two old pence) for their March 20th – 25th Festival in 1939. 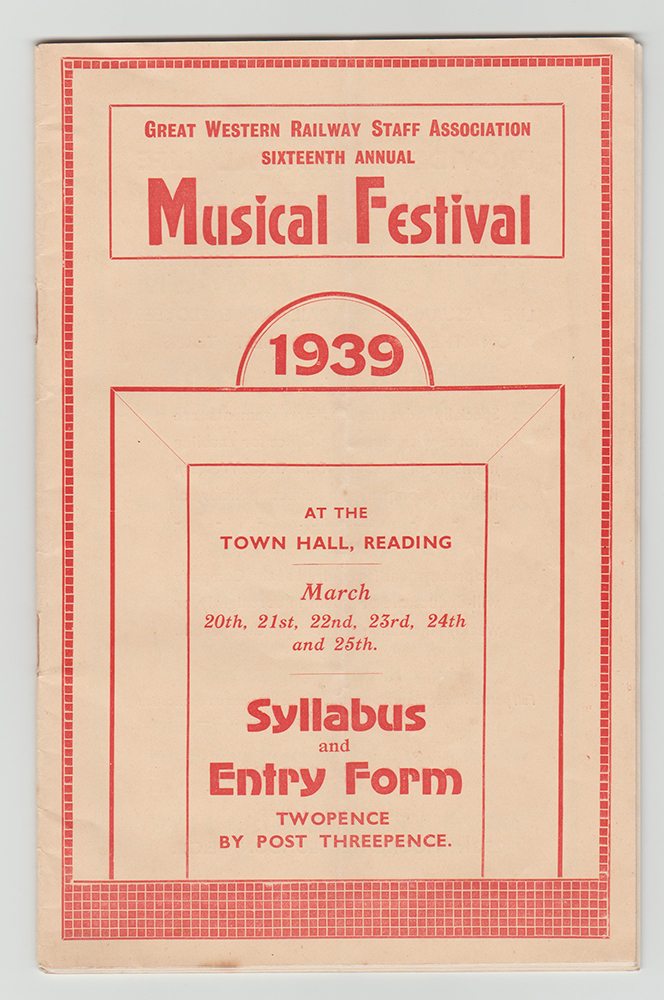 The simple paperwork belies how popular this event was, specifically for those participating in the fierce competition for prizes, but the fact that the event ran for 6 consecutive days, gives a flavour of its popularity with the staff and what a massive organisational undertaking it must have been.

Some 97 Individual competitions were run, ranging from One-Act plays, percussion Band, and even “Children’s Play, to Vocal Duets, Operatic Arias, Choirs of all kinds and standards and even Debating!

The 22 Rules of the Festival included the qualification level for certificates and medals etc.

Such annual organisation and conduct was one example of he very senior staff’s commitment to this event, and prizes were recorded in the GWR Staff Magazine, awarded on many occasions by the General Manager and his wife.

Whilst the illustrated 1939 programme entry form, is sadly a reminder that in September that year War was declared, it is noteworthy that even in nationalisation, British Railways Western Region continued to popularly operate its own Regional specific Staff Association.

We quote from a section of the pamphlet illustrated which invited staff to join that BR-wide Association:

“The Association is something more than a vehicle for running social events; it provides a rallying point for the many thousands of railway staff and their dependents who, in an age that is  becoming more and more mechanical, desire in their leisure hours opportunities for self-expression.”

Last week’s excellent piece from our blogging colleagues at Going Loco on Decoding an Engine inspired us to share a the interesting story behind the shed plate and smokebox numberplate from pannier tank 1646 that are part of our Collection.

The shed plate 60C refers to Helmsdale in the far north of Scotland – an unlikely location for a Swindon-built 0-6-0PT to be stationed!

In 1957, 1646 and 1649 were transferred to work the branch line between Dornoch and The Mound in Scotland. The two pannier tank engines, both less than a decade old were sent North by British Railways to replace two venerable ex Highland Railway W Class 0-4-4T engines (numbers 55051 and 55053) that had been built in 1905 and which had been specifically retained to work the branch.

As if that weren’t curious enough, 1646’s plates’ continued their peregrinations as they were acquired by a GWS member who emigrated with them to New Zealand! A few years ago he donated them to the Trust and they are now on display at the Railway Centre having gone from Swindon to Didcot via the Highlands and the Antipodes!

A recently acquired “City of Winchester” nameplate has generated considerable interest from visitors since the Centre re-opened. With Summer Steam Days resuming from Saturday 18 July, this week we look at these items and how they have been an intrinsic part of Great Western culture since the earliest days of the railway and popular with collectors for almost as long!

The Great Western Railway company was famed for the breadth of subjects chosen for the naming of its locomotives and nationalised British Railway Western Region continued that tradition by naming their Diesel Hydraulic Locomotives. As such visually attractive mementos of those engines, private individuals were delighted to be able to purchase nameplates from withdrawn locomotives direct from the GWR and then BRWR. In those days, the nameplates could be delivered to the purchaser’s nearest station, bound in protective sacking! A number of these are now proudly part of the Great Western Trust Collection and they are regularly displayed in the Museum.

The naming of GWR locomotives predictably began from the very beginning when the very first locomotives were ordered from private manufacturers to use on the opening between Paddington and Maidenhead (in fact Taplow) in 1838, beginning with “North Star”.

Now, before we get involved with the names themselves and even the nameplate design evolution over the 112-year existence of the GWR as a Company, we should ask ourselves why engines needed unique identification.

Well, as every privately owned motorcar has a unique Registration Number, so the government can know how many cars are on the road, check their MOT status and claim road car duty from their owners, the shareholders (and the financial accountants) of the then privately owned railway companies, wanted to know how many engines and carriages they owned and had paid for, and that each one was easily identified.

Even in Daniel Gooch’s days as the first GWR Locomotive Engineer, he needed to record every item of cost associated with each engine, even down to oil and coke consumed, and when it needed new boiler tubes etc. Fine, so why not just give each engine a numerical number? Other contemporary railway companies did, such as the Bristol & Exeter (a broad gauge line like the GWR) and the Taff Vale Railway (designed by Brunel but “narrow” or what later became known as “standard” gauge).  Well, though we don’t have hard written evidence, surely the GWR Directors were influenced by Brunel, to decide upon naming their then unique and distinctive Broad Gauge locomotives, with brass letters on steel backing plates.

Of course, as the GWR expanded its services, to include goods traffic, the sole use of names became quite a challenge, and eventually even they had to adopt cast brass number-plates for some engines, although to the very end in 1892, Broad Gauge express passenger engines always had names only.

To quash any preconception that private individuals wanting to possess GWR engine nameplates is a 20th Century phenomenon, records exist of Churchward, when he was still only the GWR Carriage & Wagon Department head, completing invoices for the mounting of ex Broad Gauge nameplates on high quality wood mounts or even incorporating them on decorative Fireplace Fire-Screens! These were bought by either GWR Directors or private individual admirers of the GWR Broad Gauge, as mementos of a sadly passed age!

When Churchward became GWR Locomotive Chief, he inherited varied engine nameplate designs from his predecessor William Dean, one being what was colloquially known as a “Ringer”, the Great Western Trust has one such on display on a replica cabside in its Museum, namely “Tregeagle” (a Cornish mythical giant) which includes the locomotive number and its Swindon Works construction number and date of build.

You will see that on Tregeagle, it only has “1824” and some telling depressions where its construction date should be! “1824” is its Swindon Works construction number, but the date of construction was removed on most, but not all “Ringers” when some concern was expressed that the GWR were still running “very old locomotives”! Silly really as they still had many good years of cost effective miles in them, so removing the offending detail was the chosen solution.

Although very neat and comprehensive, the “Ringer” design was finally rejected as a GWR standard nameplate form, which over time became like those illustrated in “City of Winchester” now in our “Recent Acquisitions” display, and the replica plate “Lady of Legend” on Saint loco 2999.  The recently completed “retro build” is set to be in action on Summer Steam Days through July allowing visitors to admire bot only the nameplate but her ornate livery.

The addition of the City nameplate is vital to the Trust’s collecting objective of having a representative example of every GWR locomotive class nameplate. This engine was constructed at Swindon alongside its very famous preserved sister, 3440 “City of Truro”.

Lady of Legend of course never actually existed on the GWR, but the Society deliberately planned and effected its creation from using the primary elements of loco 4942 Maindy Hall, as sadly none of the original members of this ground breaking Churchward locomotive design was preserved. However, in the Trust Museum we have on display the wonderfully appropriate original class member name and number-plate 2908, “Lady of Quality”.  The item is shown here with one of our period re-enactors and is an equally popular amongst our many lady visitors as a backdrop for selfies! We like to think that Churchward would have approved.

The Trust has yet to acquire an original Broad Gauge locomotive nameplate but will warmly welcome donations from existing enthusiast owners!

With high summer approaching, the thoughts of sea air and sea bathing are nothing new. The GWR took every opportunity to extol these attractions to be reached on their system, having adopted the simple but effective catch-phrase “The Holiday Line”. To make sure that hard pressed commuters into London & other major cities served by the GWR, were reminded of summer’s possibilities they commissioned artists to produce captivating posters to arrest the attention of their passengers.

One stunningly fine example illustrated, was created by Bruce Angrave around 1932, and is on display in the Great Western Trust Museum & Archive building, where it can be admired for its pure artistry and its social history implications. Those lovely young people depicted are clearly part of a favoured social set, far away from fun fairs, children and ice cream!

Now the Centre has re-opened, this poster can now be viewed along with many others in the Museum. They show the wide period of GWR and BRWR poster art and their diverse subjects and represent a very small fraction of the Trust’s acclaimed poster Collection.