The Great Western Trust is fortunate to own a number of original oil paintings and arguably the finest of these is shown here. 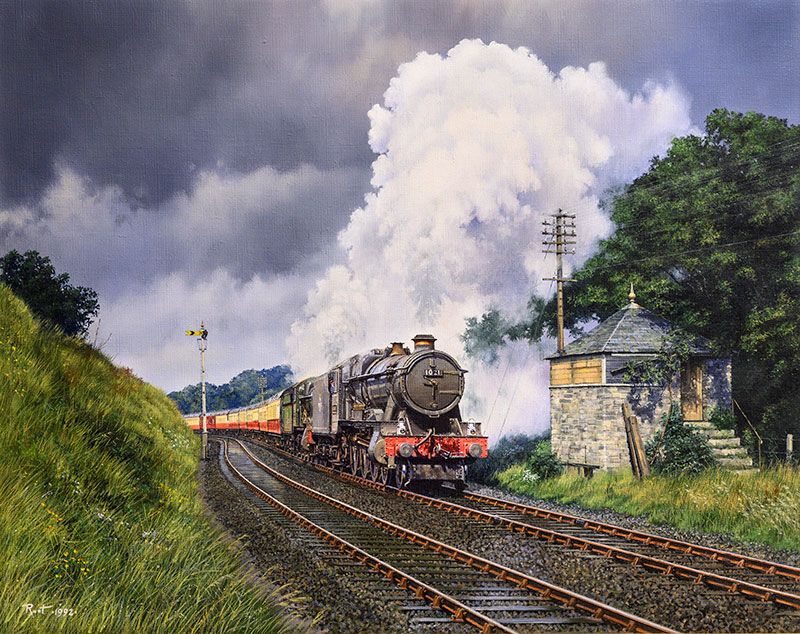 Painted by Malcolm Root GRA it was commissioned by the late and renowned railway photographer Peter Gray whose thousands of images now form part of the Trust’s collection. The painting is based on one of Peter’s favourite photographs.

The date is Saturday 2nd August 1958, a stormy day with a westerly gale blowing. One mile west of Doublebois Station between St. Pinnock and Largin viaducts on the Cornish main line, the 9.20 am Saturdays-only from St.Ives to Paddington is almost two hours into its journey. After leaving St Erth, the junction for the St Ives branch, the train is only advertised to call at Truro and Plymouth (North Road) on its journey to London. Nearing the summit of a six-mile climb from Bodmin Road and on a gradient of 1 in 159 which soon stiffens to 1 in 90 the twelve coach train carrying a senior guard and travelling ticket inspector, weighs close to 500 tons. Heavy Summer Saturday trains in the 1950s, normally between twelve and fifteen coaches in length, always need two engines in order to maintain the schedule. The firemen on locos No.1021 County of Montgomery and No. 6808 Beenham Grange will be working flat out in order to keep time on the undulating main line with barely a level section between Penzance and Plymouth. No. 1021 is allocated to Plymouth (Laira) shed  and No. 6808 to Penzance so both engines will been seen here on an almost daily basis. Two fresh engines will take over the train at Plymouth, one of which will be detached at Newton Abbot. The train then runs non stop to London but it will be close to 5 pm before the 600 or so holidaymakers arrive back at Paddington ‘all sunburnt and skint’.

Of equal interest, on the right of the painting, is Westwood Box, a typical Cornwall Railway signal box. Constructed of local stone with a slate roof, it was built around 1874 when Westwood quarry was opened to supply ballast for the railway. It was square in design and had windows on three sides to give the signalman maximum visibility. The quarry also supplied stone for the rebuilding of Brunel’s original timber viaducts, enabling the single broad gauge line to be replaced by double ‘narrow’ gauge tracks when the broad gauge was abolished in May 1892. Westwood Box closed soon after this event and was sadly demolished in the early 1960s.

Sir John Hawkins is credited with introducing tobacco into this country in 1565 and two other sea-dogs of Devon were responsible for popularising its use twenty years later. It is somewhat surprising then to learn that until 1868, smoking in a railway train or on a railway station was a criminal offence.

In the early 1850s Isambard Kingdom Brunel was travelling on the Taff Vale Railway with some senior officers of that company. He had just settled into the compartment with a big Lopez cigar when, for the second time that day, the guard, a man named Meyrick, suitably chastised the great engineer. “I had been,” said Brunel, “up to Dowlais and was quietly smoking a cigar on the platform waiting for the train back to Cardiff when Meyrick very respectfully came and reminded me that smoking was strictly prohibited on the platform. I strolled out into the Goods Yard, as there was some little time to wait before the train started, and on my return I requested Meyrick to reserve a compartment for me, which he did. When well out of the station, and as I was comfortably enjoying a smoke, to my surprise there was a tapping on the window, and Meyrick’s face appeared. In the most sorrowful tones he said, ‘There you are, at it again, Mr Brunel, a-breaking the rules.’ ”

When Viscount Ranelagh was fined for smoking in a train at Faringdon Street Station in 1867 the first step to end the ban was taken. The noble lord was fined twenty shillings plus costs. When, the following year a Bill for the Regulation of Railways was before parliament, Mr H Sheridan, MP for Dudley and a descendant of the famous dramatist, introduced an amendment to compel railway companies to provide smoking accommodation on every passenger train. Thus was the tobacco-loving passenger allowed to smoke his pipe in peace provided he travelled in a compartment specifically labelled for its use. Since 2007 we have come full circle but it is difficult to appreciate how much smoking was very much regarded as the norm in the early part of the 20th century.

In 1908 the GWR introduced its own brand of Virginia cigarettes. Made for them by Lambert and Butler, they were sold at Paddington Station, in restaurant cars and in the Company’s hotels.

However, this venture only lasted until hostilities commenced in 1914, correspondingly, packets of this brand are exceedingly rare and only three or four are thought to have survived. The Trust is fortunate in having two of these, part of the R K Bird collection.

We also have ‘vesta’ tins in which non-safety matches were sold. These small tins, which carry advertising, are also very rare and have a striking ridge on the base.

After the First World War these tins were superseded by the book match, by now of the safety variety, all made by Bryant & May. Examples of these are shown here, again all bearing some form of advertising.

Ashtrays were, of course, also provided. China and glass were used in the Company’s hotels and refreshment rooms and metal versions in restaurant cars. The ‘modern’ Bakelite item shown here came from Royal Saloon No.9002.

Smoking is now almost universally condemned but the Trust is fortunate is having such a wealth of artefacts which allows it to portray history rather than judge it.

We doubt that anyone today would ever think of contacting the existing railway franchises to ask for them to quote for, let alone provide a household content removals and delivery service!

However, as legally empowered by Parliament ‘Common Carriers’, the individual railway companies had the ability to cover a vast range of goods, from pen nibs to massive generators for power stations, and so they had railway wagons of necessary scale to cope. Crucially, unlike the much more focussed (some would argue far too limited) service of today, only providing rail borne transport, they also had a massive road transport capability.

So the strikingly attractive brochure illustrated demonstrates the remarkable extent to which the railway companies sought family household removal custom, and endeavoured to answer all the obvious questions a family would raise about such a service. The pictures and story board sketches are a delight!

Two further points should be added. This brochure was issued by all the four private railway companies who in the years between the World Wars, realised aggressive inter railway company competition was self-harming when the greatest threat to their trade came from the burgeoning road transport industry. It should also be explained that perhaps even more remarkable to us today, was that the railway companies even moved entire farms, livestock, equipment and house contents too! But that is another story.

This brochure is but one from the many hundreds in the Great Western Trust collection at Didcot Railway Centre.

Possibly the ‘largest’ exhibit in the Trust collection is the series of nineteen cast iron letters that spell GREAT WESTERN RAILWAY. They were recovered in the late 1960s from the station building at Acton, 4 miles from Paddington on the GWR main line. Due to a stroke of good fortune, a British Railways employee happened to be on hand when demolition contractors were removing them prior to demolishing the entire building. He kept them in his garage until the 1980s when they were generously offered to us and we accepted them with alacrity. Careful removal of many layers of paint revealed the original colour in which they are now displayed.

The letters are 15½” high and were used on a number of stations in the London Division but we believe that these are the only examples to have survived. They were cast in a very ornate style by Walter McFarlane’s Saracen foundry in Possil, on the north side of Glasgow. McFarlane’s were manufacturers of a vast array of ornamental and structural ironwork. Their products can still be found all over the world and ranged from lamp standards, bandstands, water fountains, gates, balustrades, verandahs, bridges and even gents urinals. If you can think of an item of architectural ironwork, they probably made it.

McFarlane’s independent existence ended in 1965 and the foundry closed in 1967. Heritage Engineering based in Glasgow still restore and manufacture many original designs of the Saracen Foundry and examples of MacFarlane’s original catalogues are available on various websites.