It’s not every day that ‘buy one get one free’ occurs in the world of railway posters, but this was one of those rare events. In 2008 the Trust became aware of an early GWR pictorial poster of Dartmouth being offered at a local auction house; we duly attended and purchased the poster at a very reasonable price.

On closer examination it became apparent that underneath Dartmouth was something else and with the poster being mounted on heavy board, the decision was made to engage our expert paper conservator, Kate Armor, to work her magic. Not long after, she contacted us and asked “I have done your Dartmouth poster, what do you want me to do with the one underneath?” The invisible gem (hidden by the visible gem) was The Prince of Wales Route issued by the Cork Bandon and South Coast Railway of Ireland. It was caked in glue but Kate did a superb job in restoring it and the colours are quite stunning.

The GWR and the CB&SCR had many close links in promoting tourism to Ireland and we suspect that the Irish poster had been displayed in West Wales and was superseded by the GWR one. Our friends in the Irish railway preservation world had only ever seen a black and white version and so were equally delighted to have it revealed in glorious colour.

From ‘The Training Haven of King George & his Sons’ the GWR poster dates from no earlier than 1911 and ‘The English Rhine’ would certainly not have been used after 1914! CB&SCR poster c1908.

Records indicate that as early as late 1844 the GWR ran their first ‘Excursion’ trips from London to Bath & Bristol, apparently in response to public demand, and the popularity of these out of the ordinary timetable service trains was such that frankly, arranging and running them over an ever expanding system, became quite a substantial part of its business.

To advertise these special trains, GWR pasted larger ‘Bills’ as adverts at the stations affected along with smaller ‘Handbills’ produced in substantial numbers for free collection by potential ‘Excursionists’, the very earliest examples in the Great Western Trust Collection at Didcot, date between 1858-1865, and as they were used by a senior Bristol Divisional officer of the time to make useful notes on their operation, they reveal a wealth of social history from quite humble and ephemeral pieces of paper.

In an internal 1876 GWR Report, it was revealed that for each excursion train starting from London, some 700 posters and no less than 18,500 handbills were printed! At that time there were about 110 excursions from London in the half-year August to January.

As social attitudes evolved, Sundays and Bank Holidays became very significant additional opportunities for excursion train provision. Whilst all those trains used existing carriage stock, it is a fact that some years after the other Big Four private railways produced carriages specifically for excursion trains, the GWR only did so from the Silver Jubilee year of 1935. These carriages had a central aisle with 8 partitioned bays without sliding doors and in a modern decor design. They were specifically designed for excursion and private party use, the open interiors then being quite a ‘modern approach’ for the still rather conservative GWR! Sets were constructed even up to 1940, and the thankfully a fine restored example, No 1289, is in the collection at Didcot, and the accompanying photos illustrate its attractive appearance.

With such popularity it is not surprising that after Nationalisation, BRWR continued in the same spirit and in significant quantity. The Trust has a vast number of examples. That illustrated gives the relatively eye catching design of a BRWR Diesel Hydraulic ‘ Hymek’ D7000 series loco (probably by A N Wolstenhome who designed BRWR Posters and the covers of Ian Allan Spotters Books). This intriguing Excursion itself ran from Cardiff & Newport to Didcot, but not on just one isolated date, but each Weekday from November 1962 to June 1963. Why one might wonder from Wales to Didcot? Our current assumption is that during WW2, numerous railway staff, especially footplatemen, were urgently needed at depots nearer London, and Didcot was extremely important to the War effort. So, enginemen from South Wales would transfer to Didcot, and either bring to Didcot or start thier families here. Years later, visiting far flung relatives would have been a strong driver for extended families, particularly at reduced fare rates. Of course others in Wales might have used the trains to then visit Oxford.

Here is a photo of an excursion train to Pinewood Studios on 28 April 1937. The train ran from Bristol Temple Meads to Slough, where passengers were taken by road to Pinewood. The locomotive is No 4081 'Warwick Castle'.

Having already described the vast numbers of handbills printed for each train, this handbill, printed by a local Cardiff company however disappointingly does not record the number printed. Many others in the Trust collection do however, especially those starting from London, and at least a thousand seems to be the minimum printed even in BR days. Sadly we cannot replicate such an Excursion today with a D7000, nor can the current GWR Franchise do so as all its trains are fixed by published schedules.

Inauguration Ceremony . . . for the new computer! 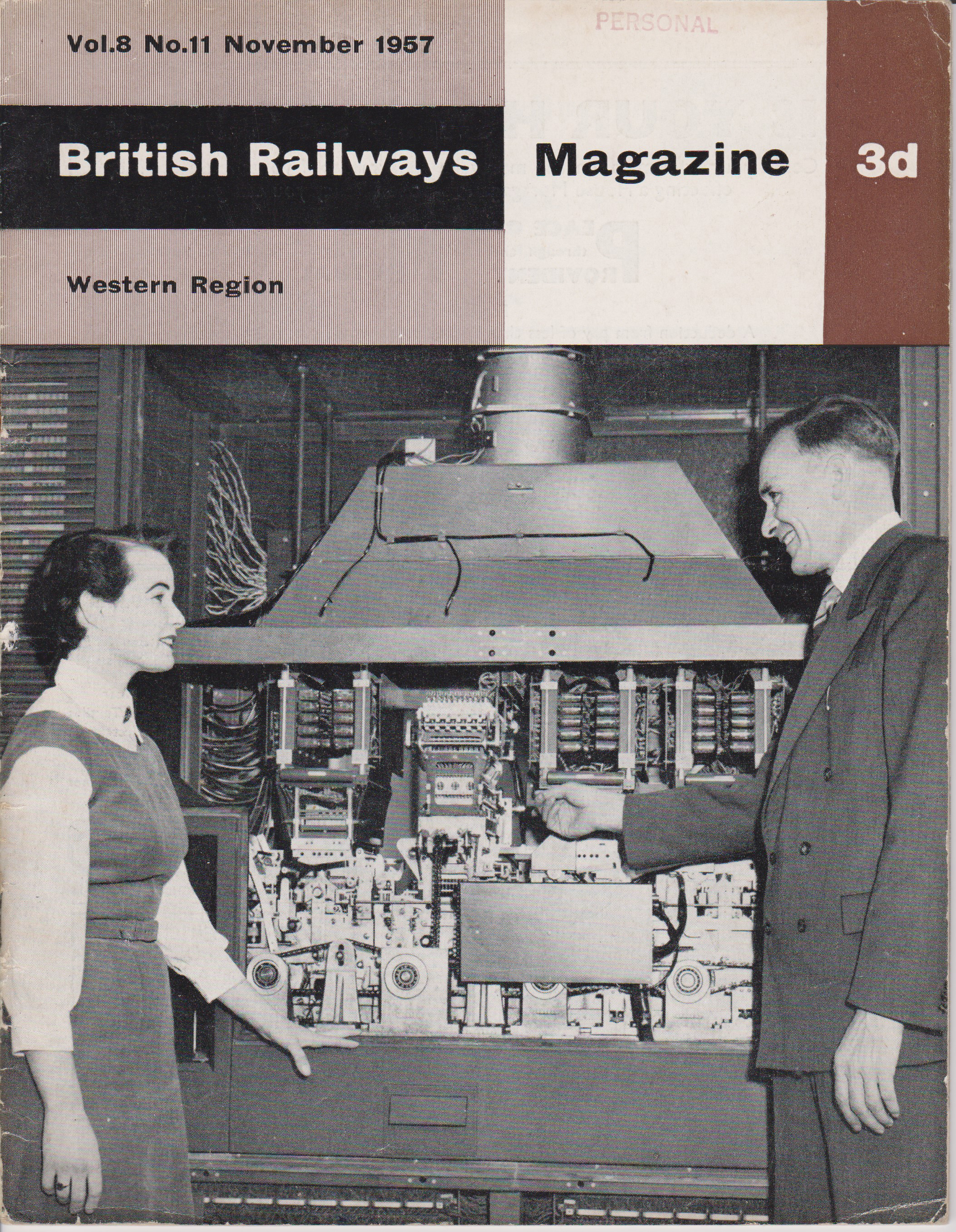 Each week, Tuesday Treasures features artefacts in the care of the Great Western Trust – sometimes showcasing items that you can see on display in the Museum at Didcot, but often widening access by highlighting objects in the Collection but which space constraints or conservation considerations mean we cannot have on show.

The Trust’s collection of Great Western Railway Staff Magazines is firmly in the latter category, we are fortunate to hold bound editions of the GWR’s first dabblings with an in-house magazine that was produced from 1862 – 1864  (perhaps they could feature as a future ‘Treasure’?), as well as a complete set of the much-loved staff journal that was published every month from 1888 until December 1947.

After Nationlisation in 1948, British Railways Western Region continued to produce the magazine until May 1963 when it was replaced by a staff newspaper. Again the Trust is fortunate to hold a complete set from this era when technological innovations and modernisation saw great changes across the network with many improvements trumpeted in the magazine’s columns and it is one such example that is this week’s Tuesday Treasure. . . 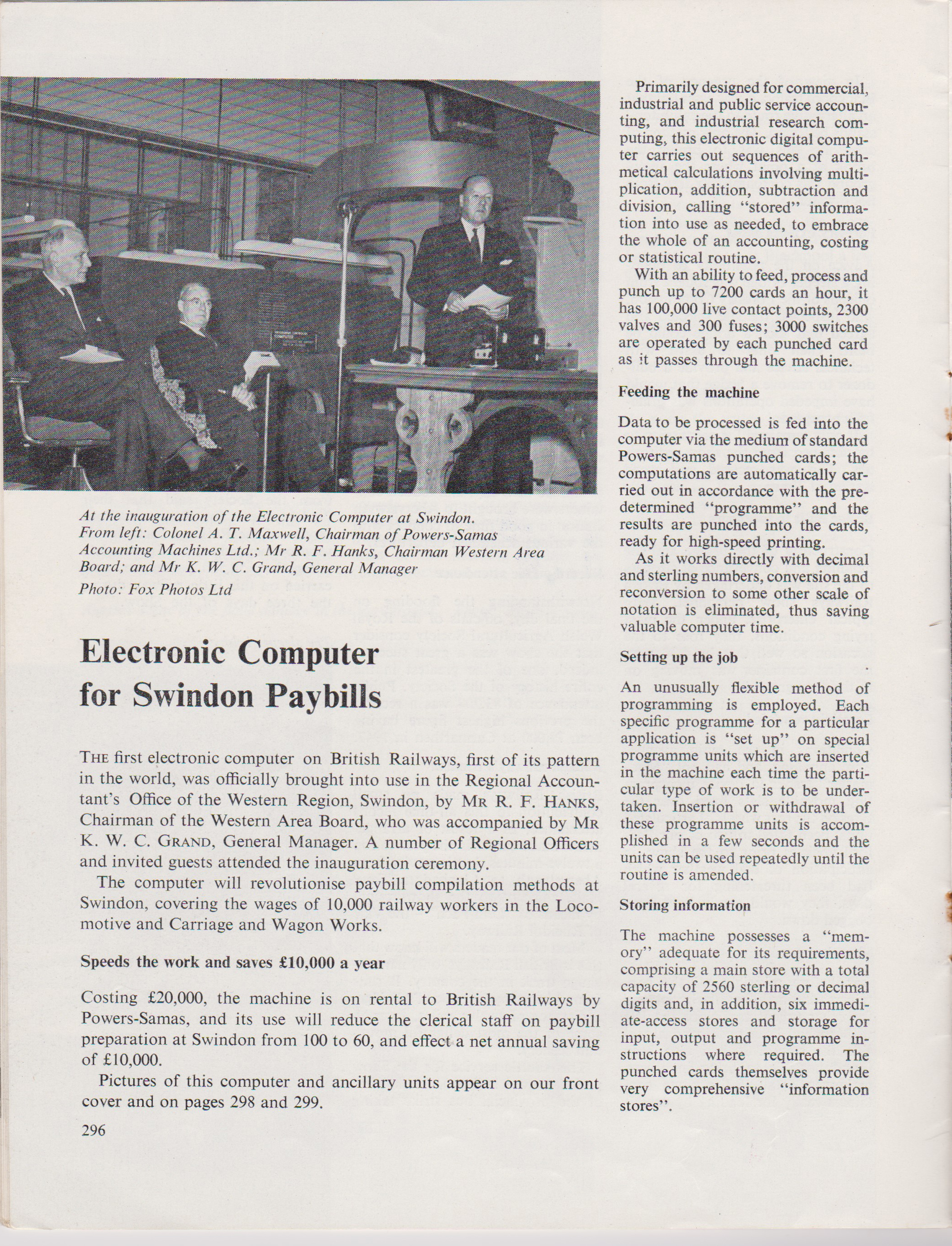 From the BR(WR) Staff Magazine for November 1957 came the announcement of the first electronic computer on BR, the first of its type in the world. The computer revolutionised paybill compilation at Swindon Works and enabled a clerical staff reduction from 100 to 60, saving £10,000 per year (approx £240,000 at current values). 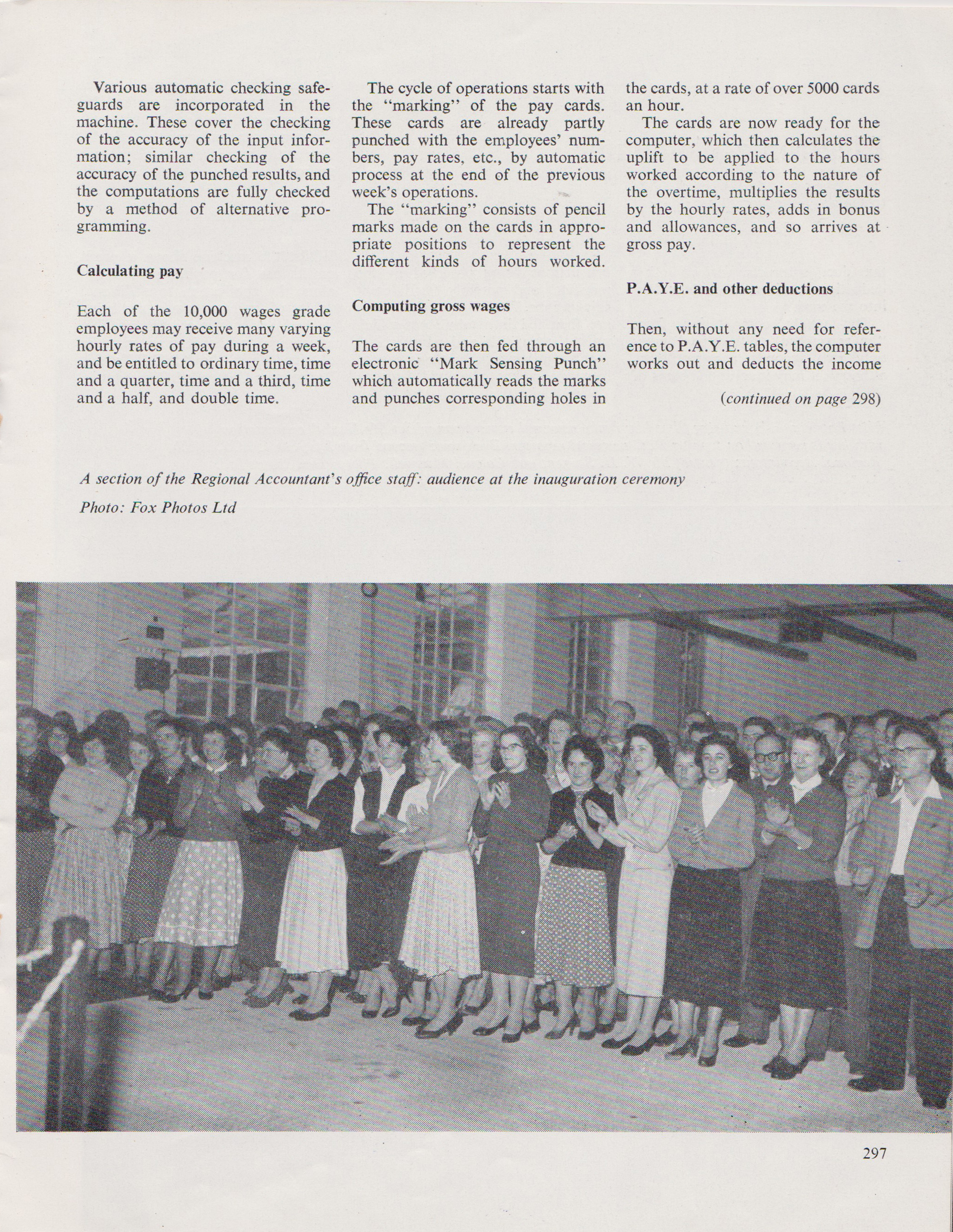 Today, it seems incredible that the installation of a computer would warrant a four-page feature in a publication for all employees; more extraordinary is that the article covers an ‘inauguration ceremony’ that was filmed by Pathé News – the equivalent of ‘going viral’ nowadays! It’s also not clear whether the Regional Accounts Staff pictured applauding at the switch on were aware that the computer could threaten the jobs of 45% of their number. 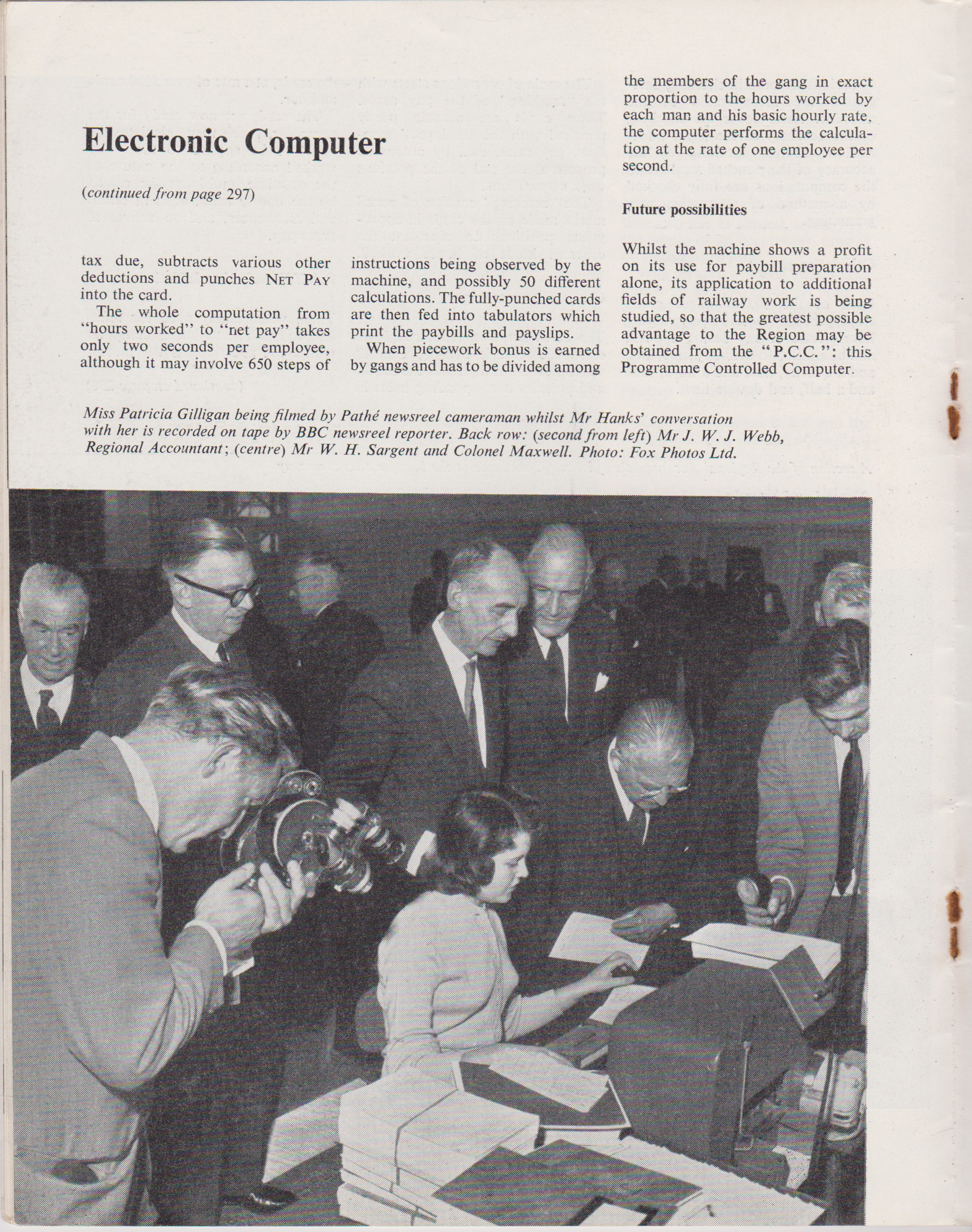 As can be seen, the machine was about the size of a garage and certainly had significant power consumption, but that was cutting edge technology of the 1950s.

Costing £20,000, the machine was leased from the manufacturers, Powers-Samas. Working on a punched-card system it had the ability to carry out thousands of calculations per hour. Each of the 10,000 wages grade employees received various hourly and overtime rates together with piecework payments which had to be divided among members of the gang in direct proportion to the hours worked. The whole computation, from ‘hours worked’ to ‘net pay’ took only two seconds per employee. 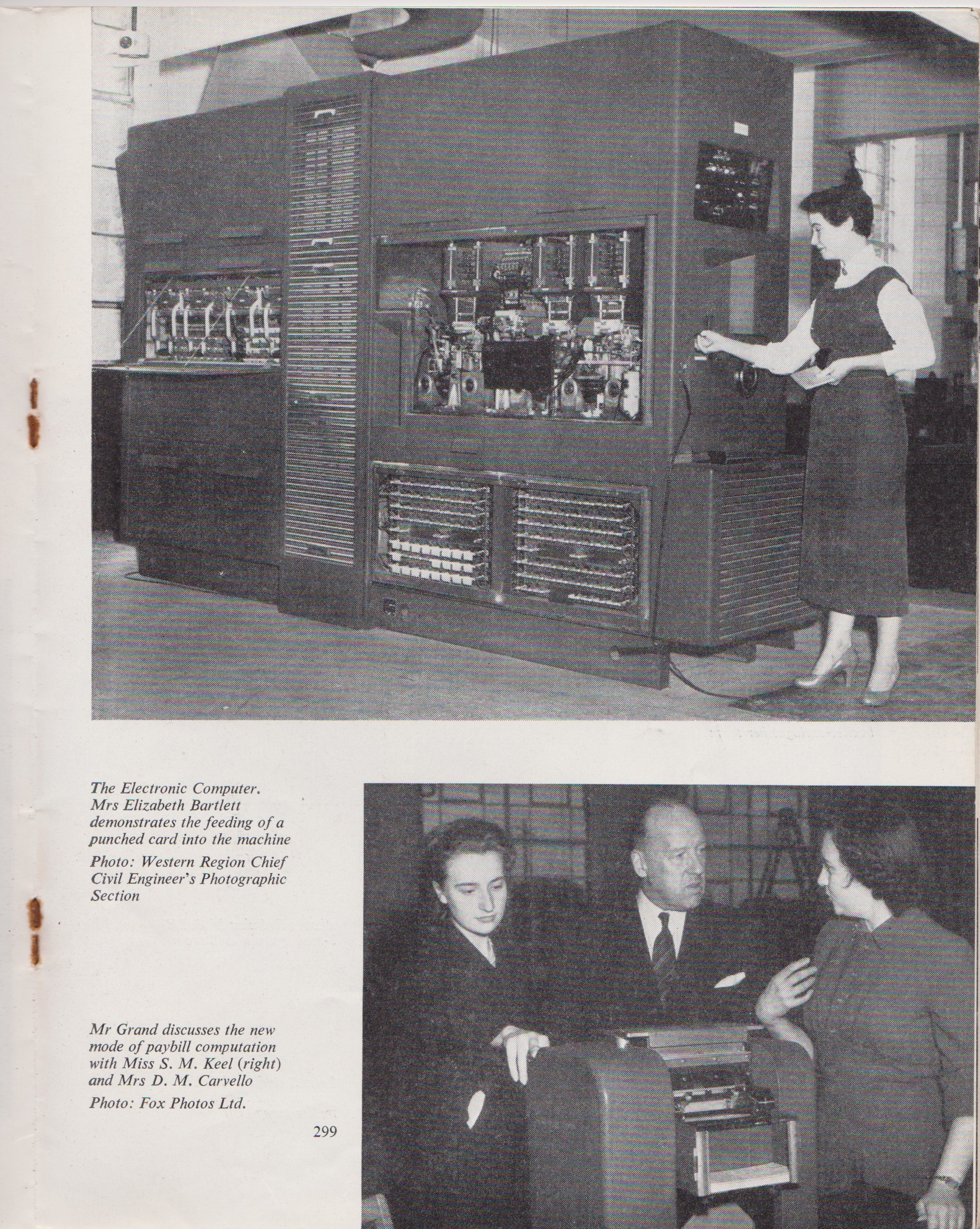 Powers-Samas was a British company that specialised in punched-card accounting machines. After a series of mergers, they became part of International Computers Ltd (ICL) in 1968. (Thanks to Grace’s Guide for this information).

All aboard for the ‘Radio Cruise’ 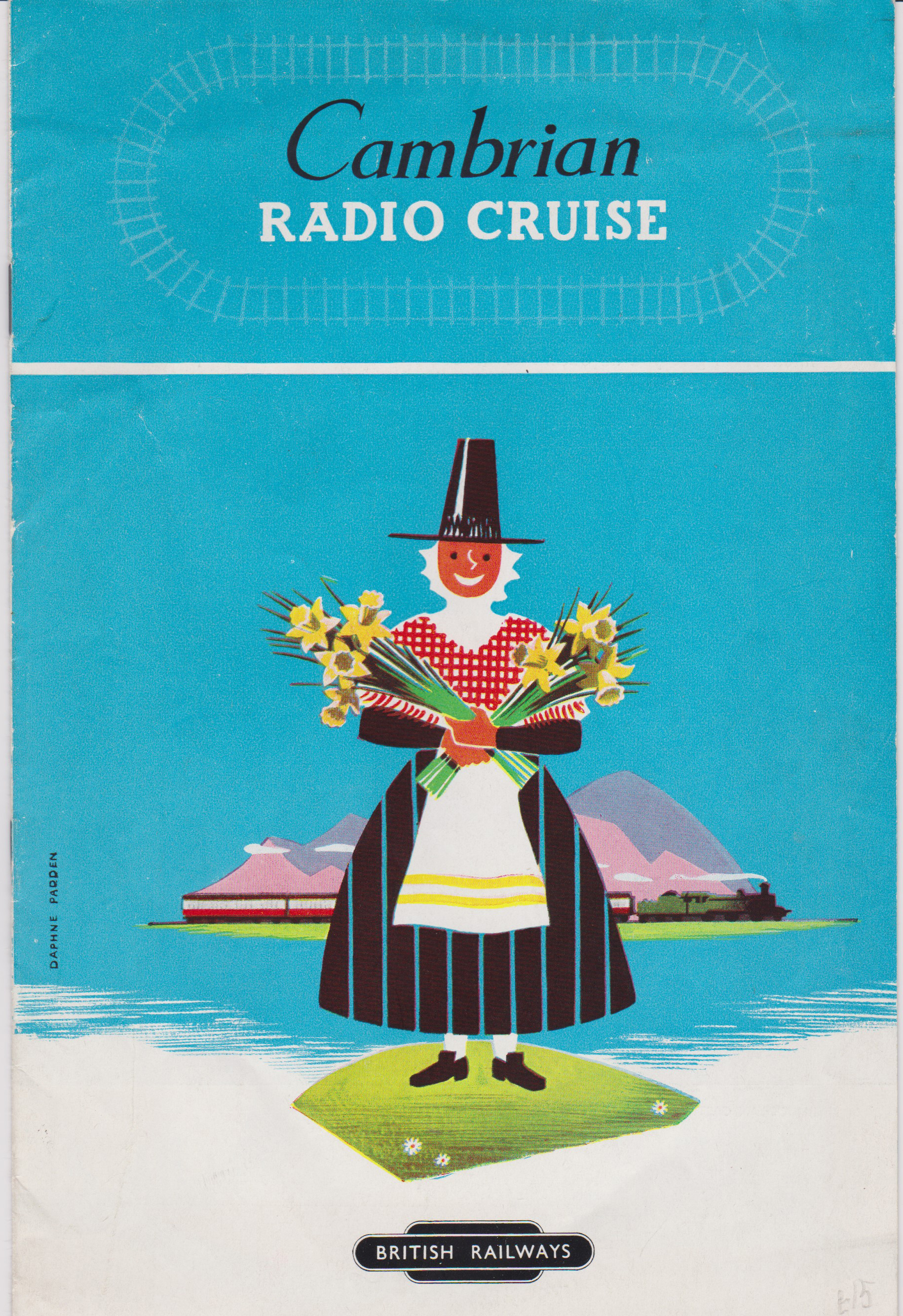 Billed as ‘The Finest and Most Unique Rail Tour in Britain’ the tour ran Mondays to Fridays from June to September. It was a dedicated train with ‘an individual armchair for each passenger, facilities for light meals and refreshments a descriptive commentary over a loudspeaker system of the passing scene – hence the unusual ‘radio’ tag in the train’s title. 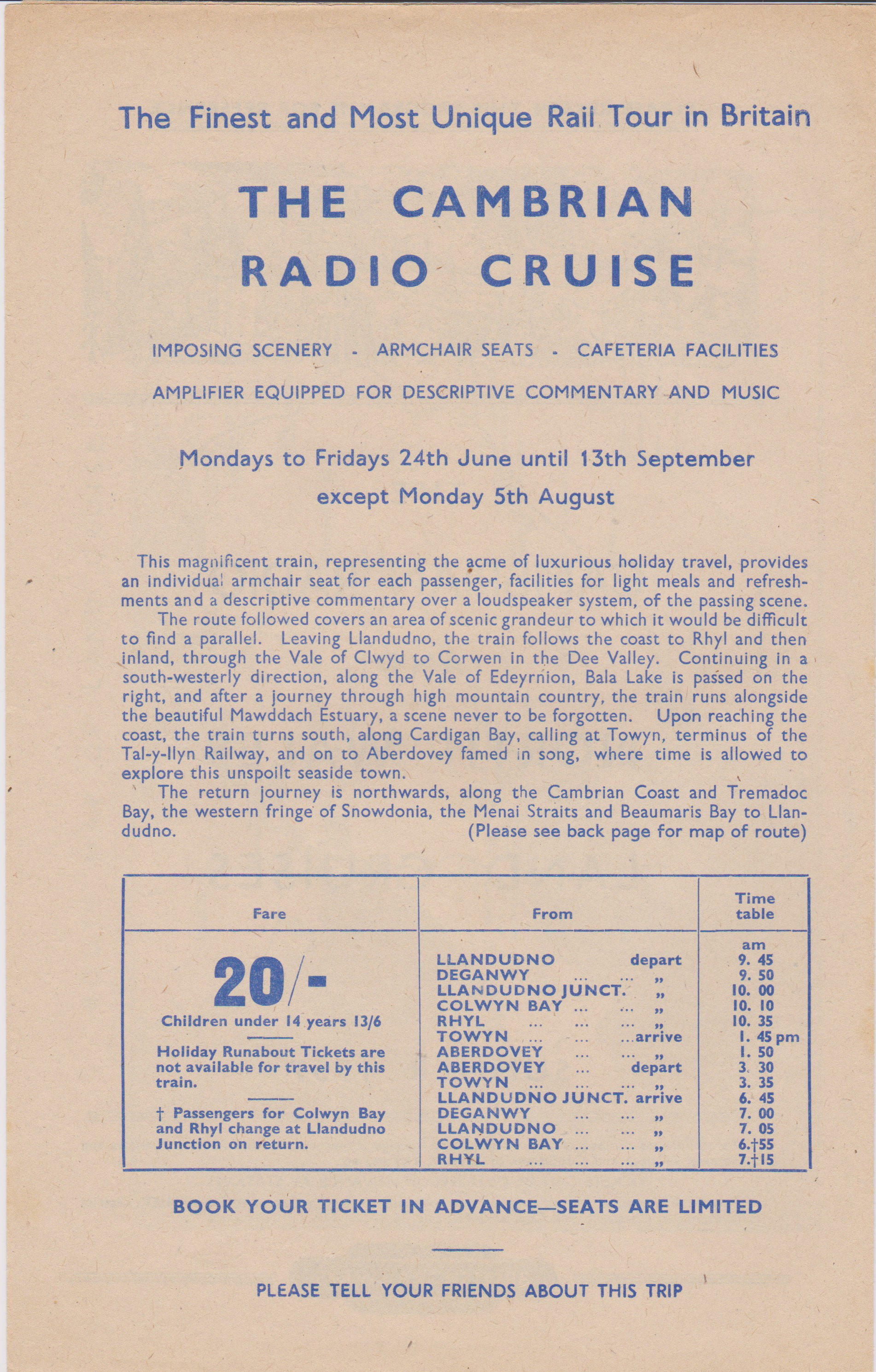 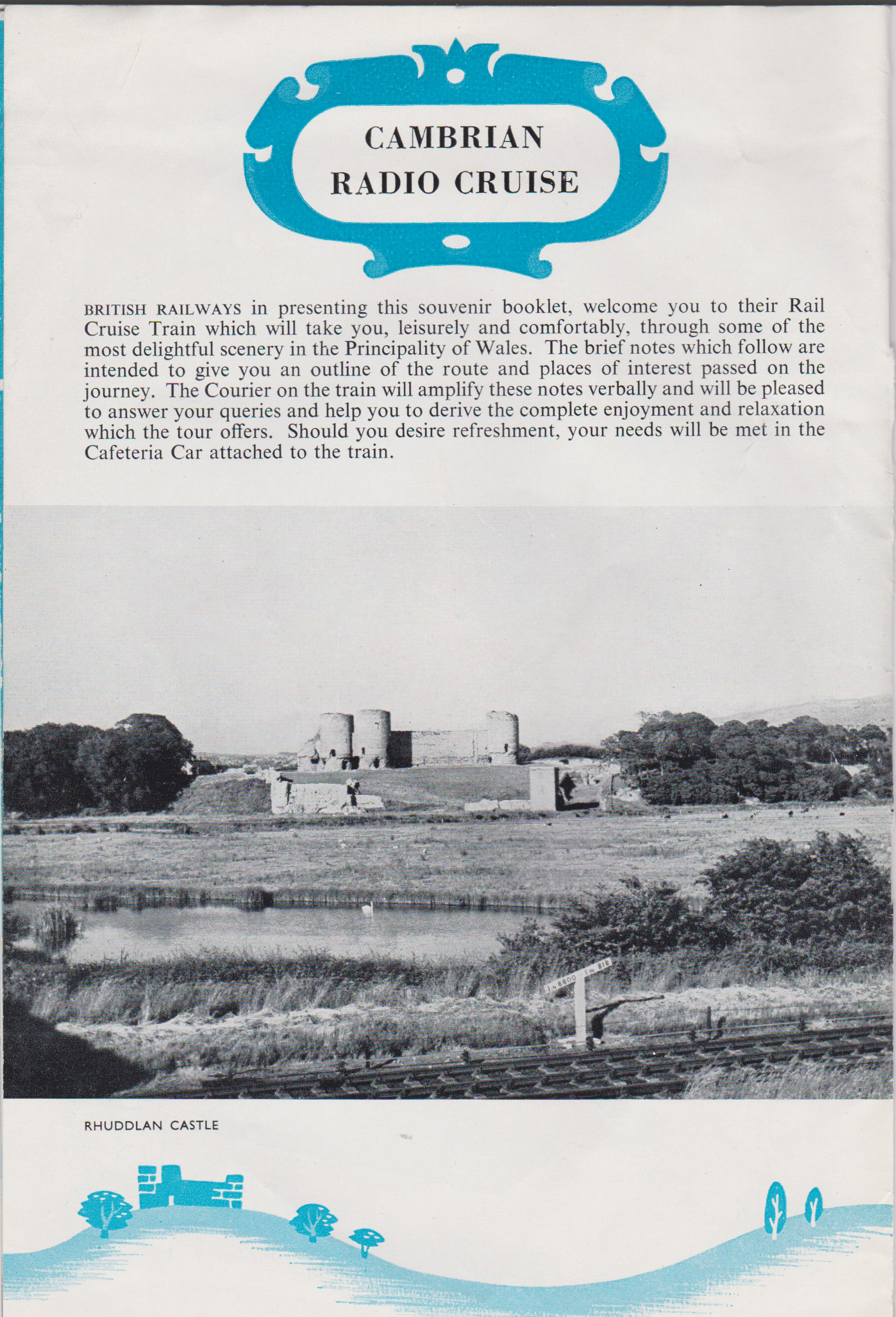 « Back To Tuesday Treasures Index